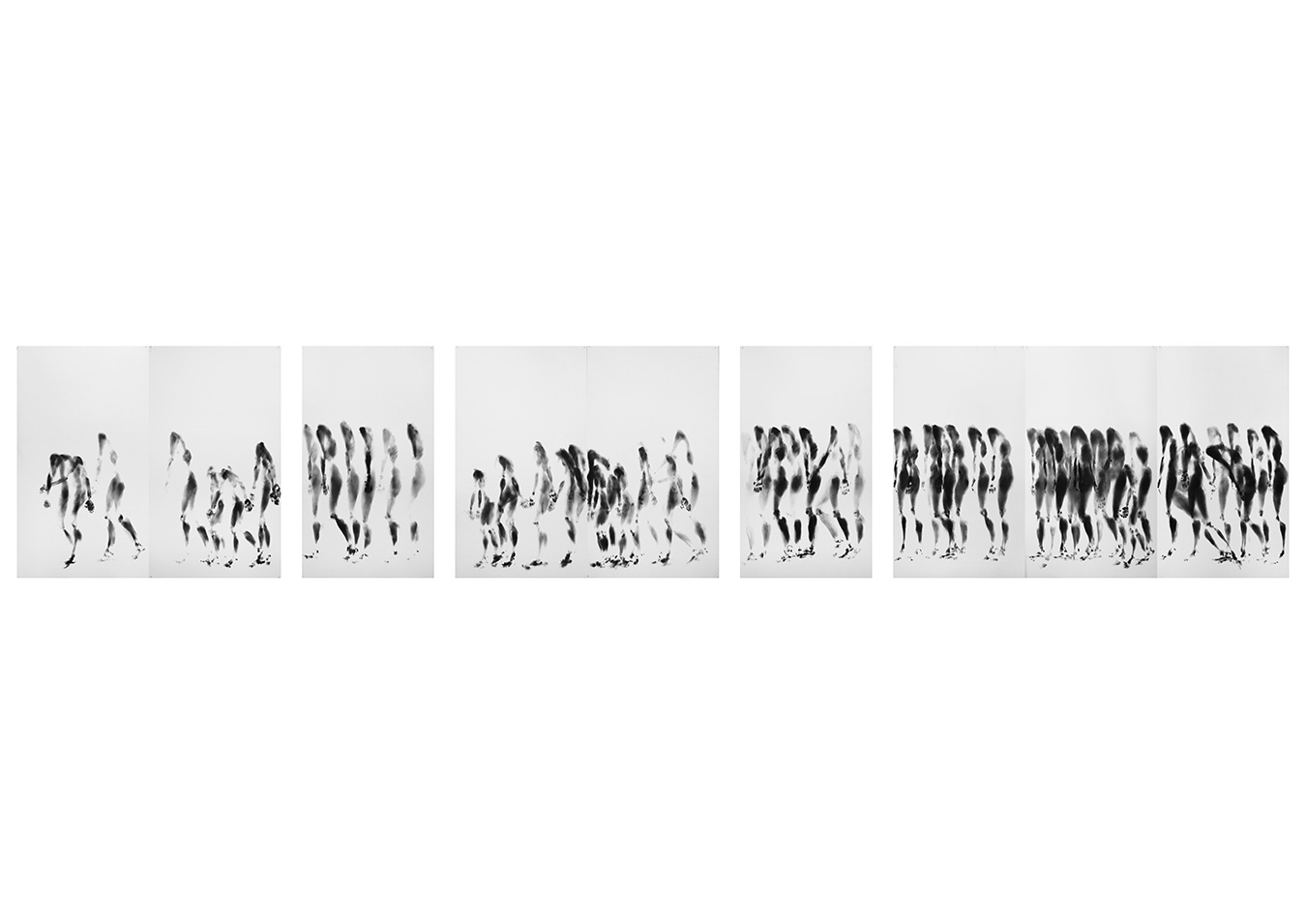 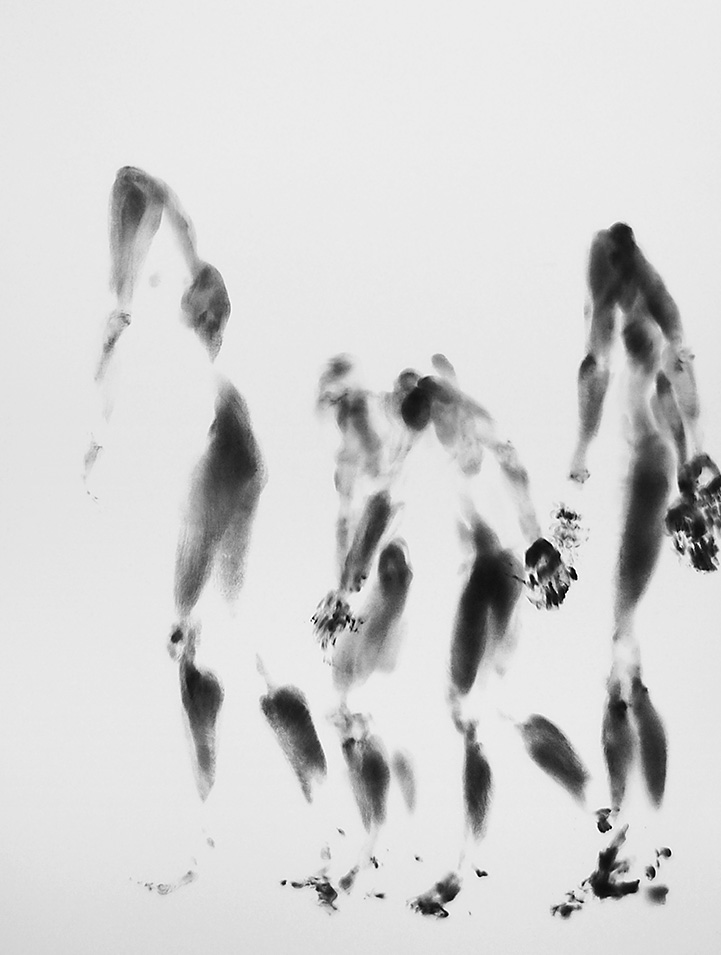 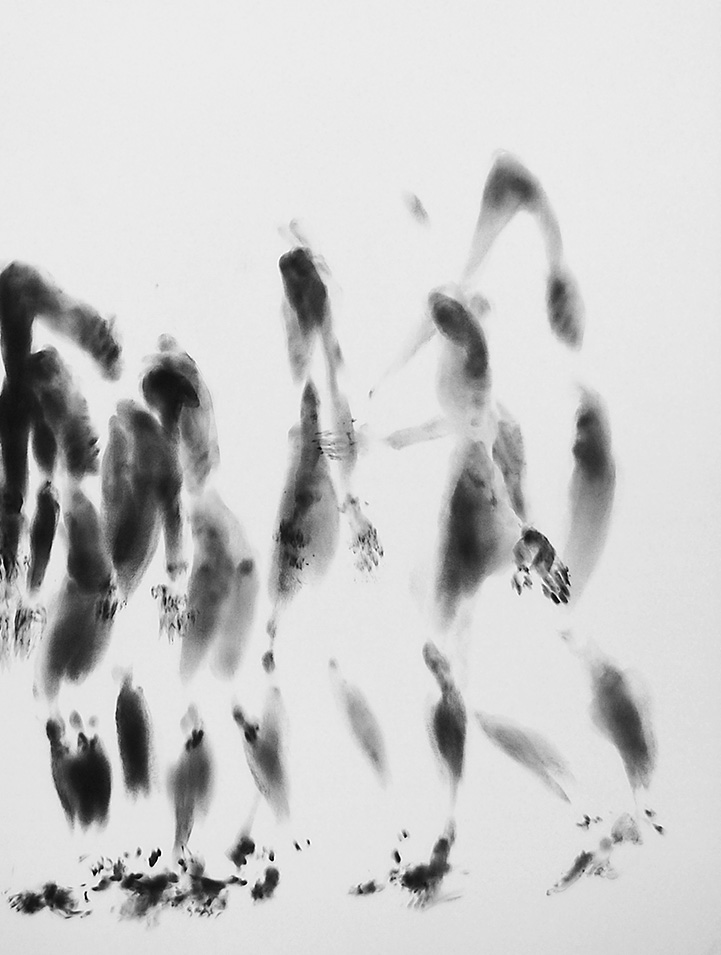 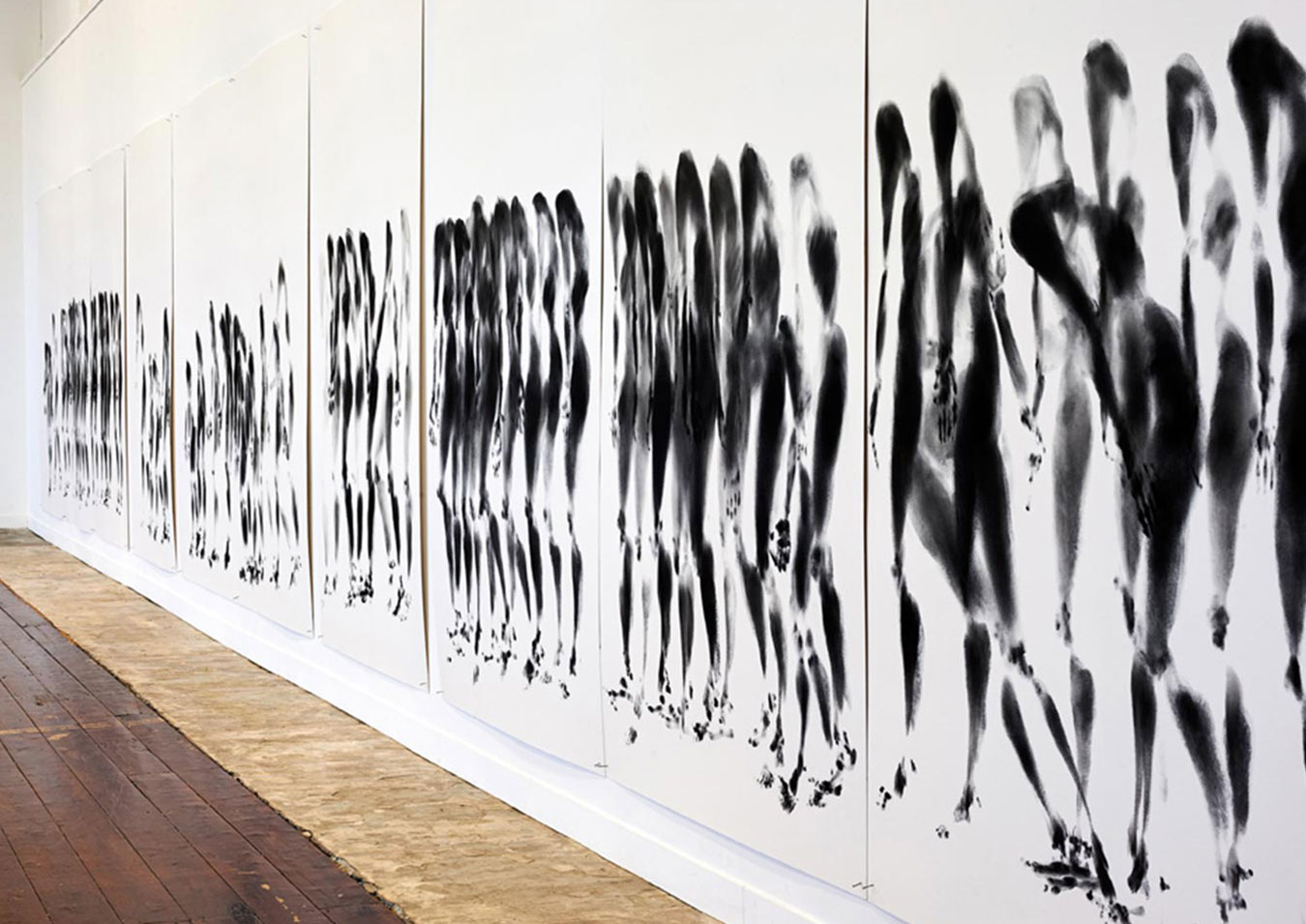 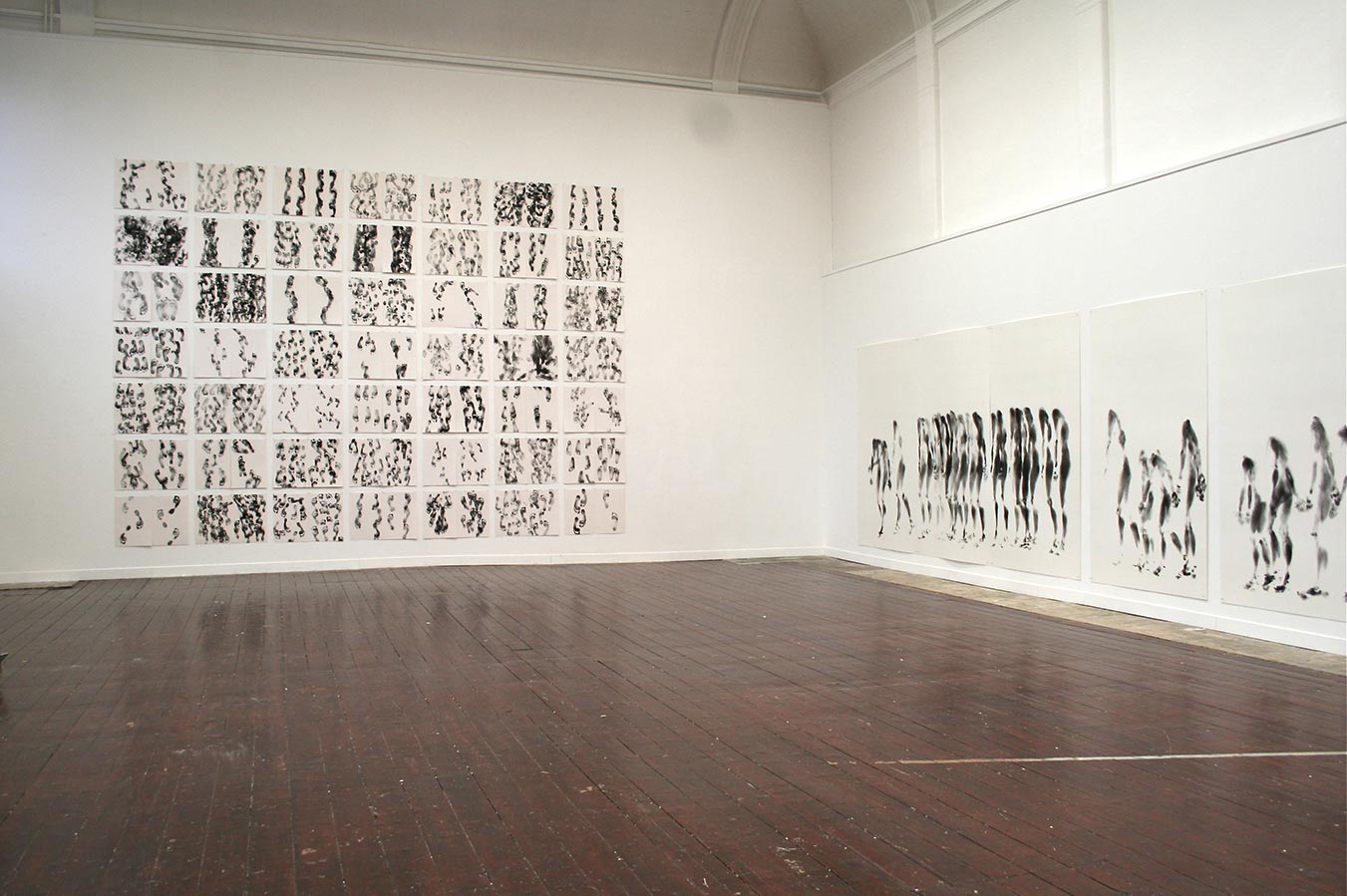 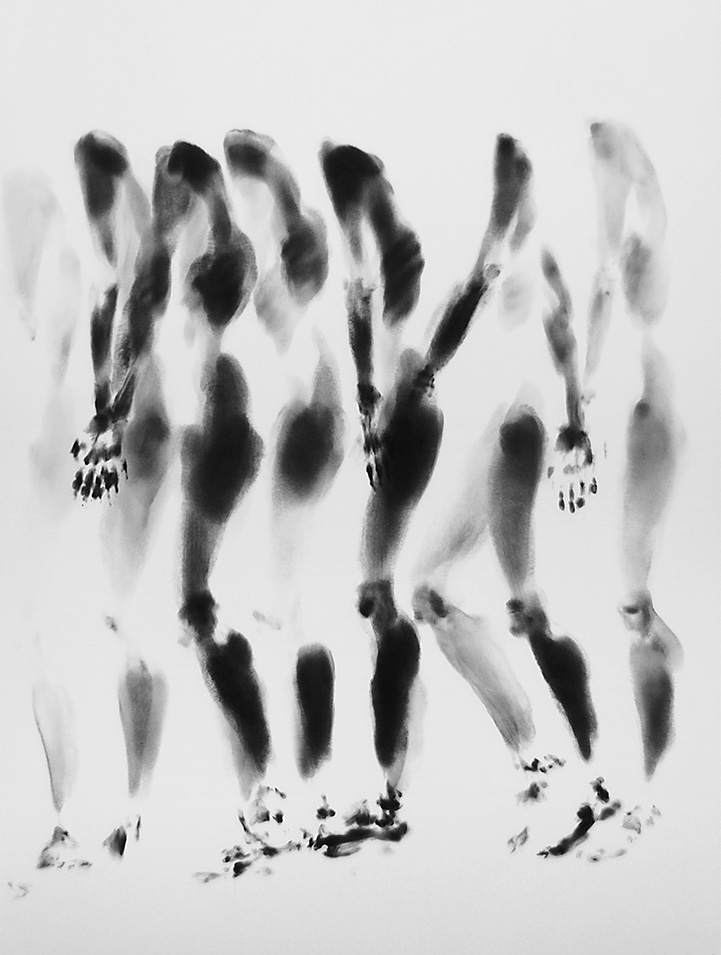 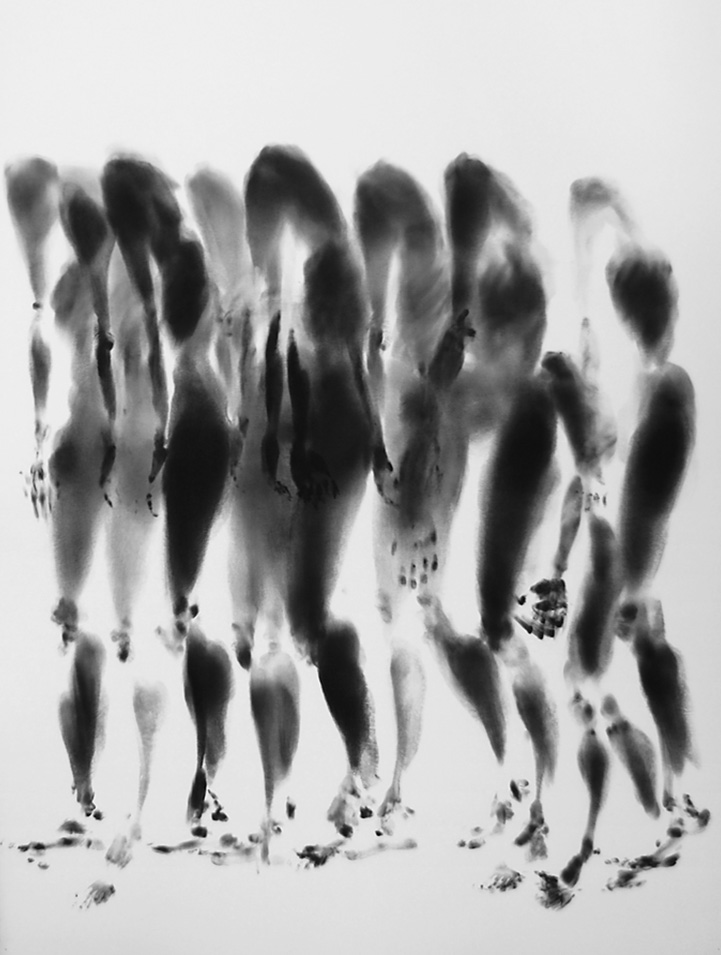 Mensch is about human beings being expelled. A procession of bodies. A crowd of people on the move.

The Mensch project is a continuation of the installation Faith-Fear-Face  presented in 2013 at the GEM in The Hague, in which I tried to visualize one of the great dramas of human trafficking: in 2000, on their way to Dover, hidden in a container full of tomato crates, 58 Chinese suffocated.

Imitating the photo’s, scans and fingerprints of the dead fugitives that I encountered in the police file – disclosed to me with special permission – I started to make prints using my own body. I rolled myself in a layer of charcoal on the floor of my studio and rubbed the black dust into my skin. I discovered that I could suggest impossible positions, that in the actual printing I could make my body male or female, that it was possible to suggest depth by pressing successive layers onto the paper. The images looked like x-rays.

The bodies of Faith-Fear-Face exist in the lowest circles of Dante’s hell. They have been stripped of every freedom, of all humanity and dignity.

Images of multitudes of people fleeing from their homes and countries are now presented us on a daily basis – poignant, horrific. Since my mind functions through images more than words, I am reminded of Adam and Eve’s expulsion from Paradise. In today’s images of fugitives I detect an expulsion too, and so the question of good and evil takes on a specific, contemporary meaning. We are all mortal, in this respect there is no choice for us. But if we say: freedom of speech, do we then also mean the freedom of our body to move?

Contemporary iconography: rows of people, the strict and oppressive rhythm of bodies, like a barcode. The DNA code of one human being, of mankind.

The charcoal body print can only be produced by a person who is breathing. Only when I am breathing and my skin is soft and moist, I can show human identity and human mortality.

Life and death are central in this day and age. Man has identity as one single person and as a crowd of people.

In the body prints I did not want to focus on emotion, shame and suffering. I concluded that the shadow of a human being, walking in a row of human beings, was most confrontational and topical. A procession of human beings elicits an image which connects the past with the present. In the procession children walk together with us.