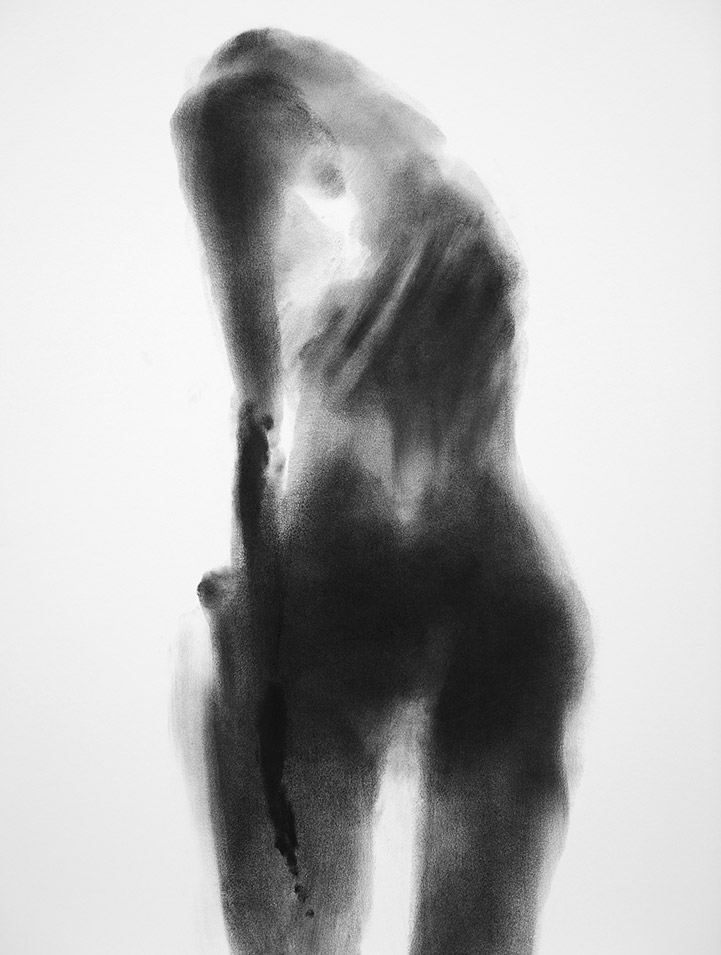 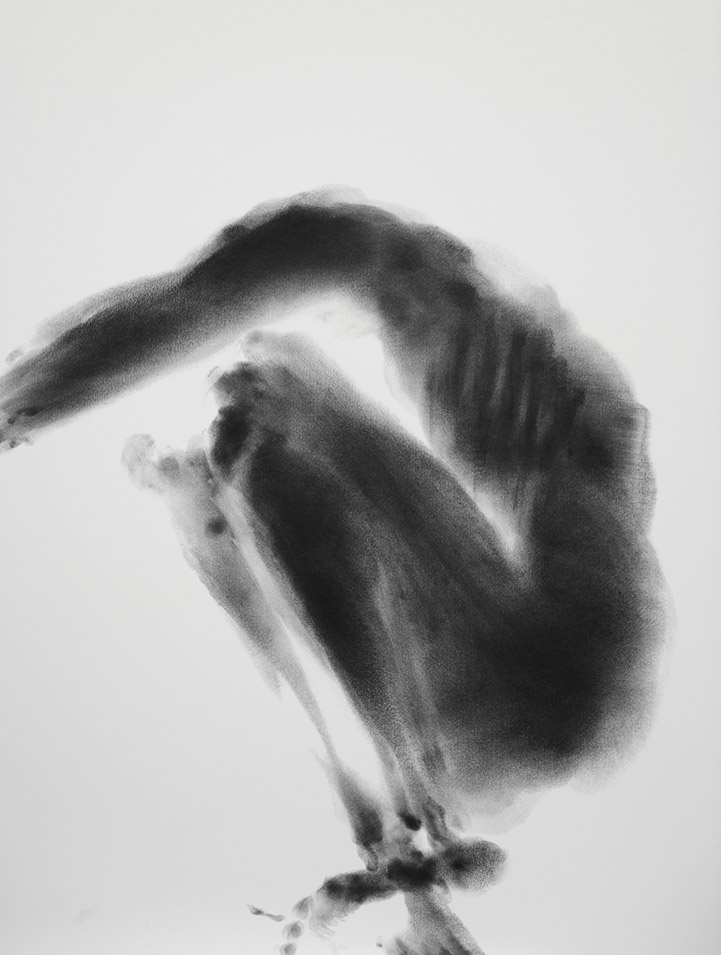 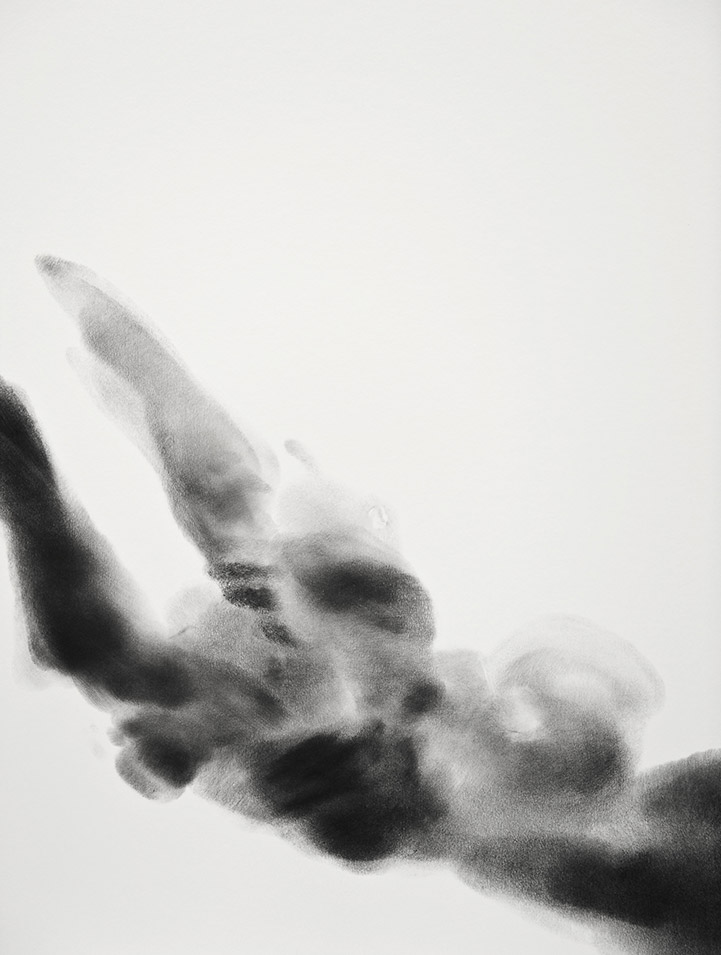 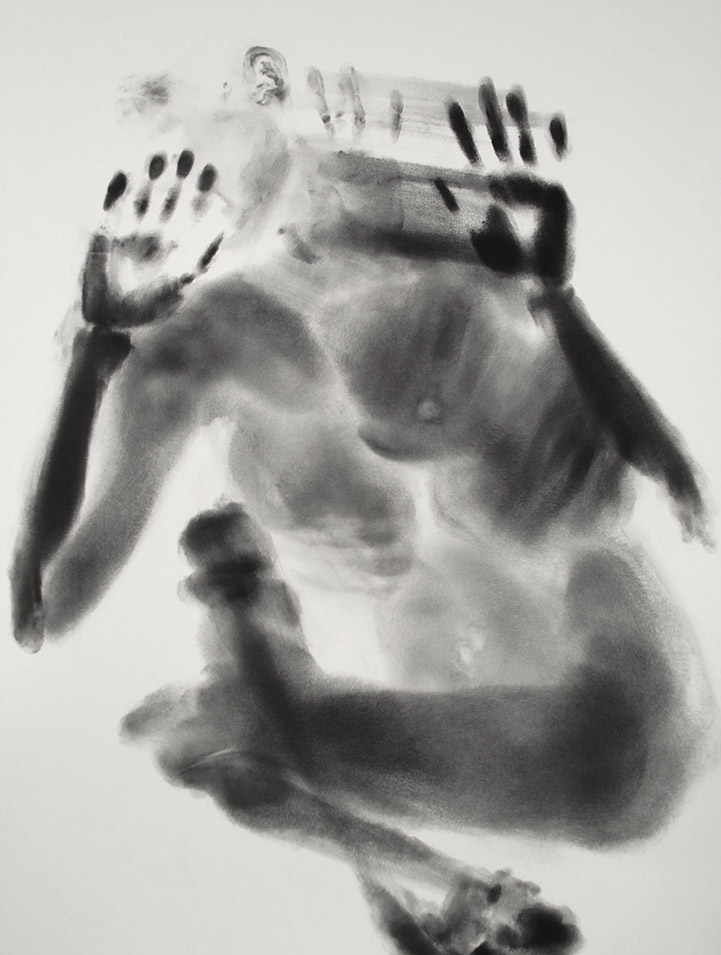 Because of Container (2005) I was asked to do a project about people who try to flee towards a better future by hiding in containers transported by lorries and ships. Sometimes this ends in disaster, like the 58 Chinese who died in 2000 trying to reach the UK in a Dutch refrigorator truck.

The official police files were put at my disposal: the reports, the pictures, the video’s, extremely shocking material. The people hiding between crates of tomatoes suffocated because of a lack of oxygen.

In the files I found the imprints of the hands of these people. I started to make charcoal prints of my own hands and arms and after that of my entire body using a slide projector as a spotlight. I found out that by repeating the imprint of my postures in layers I could create depth in the images, as if it were x-rays. Also I discovered I could give my imprints male or female characteristics.

This printing is extremely exhausting and painful because you have to press through your own flesh till the bones become visible on the paper. However, this is how I came closer to my own shadow and more so to the shadows of the people suffocated in the container. Because my skin lives, I could make charcoal imprints of myself – something they could not do any more. I was able to creep into shadows of human bodies, into the shadow of others.

In the background of the studies as a preparation for the big project, the chapters about Hell from Dante Alighieri’s Divine Comedy played an important role. His descriptions of the bodies residing in hell are highly visual, imaginative, almost cinematic and this helped me to use my own body in that way. The desperation, unconsciousness, and perishing of human beings I tried to express by printing out unnatural movements. A distorted three-dimensionality.

Each figure you see is a repetition of imprints, each time moved across the paper just a few millimeters, resulting in a certain depth within the image. My main discovery: you actually print your skeleton which becomes pronounced through the skin, a very macabre result.

Dante’s descriptions also helped me to deal with integrity with other people’s afflictions: not to represent pain, like an anecdote, but more to suggest it. I wanted to communicate with the public what I saw in the images and video’s in the dossier. It is not my pain you see; I am an instrumnt, an abstraction to make pain visible.