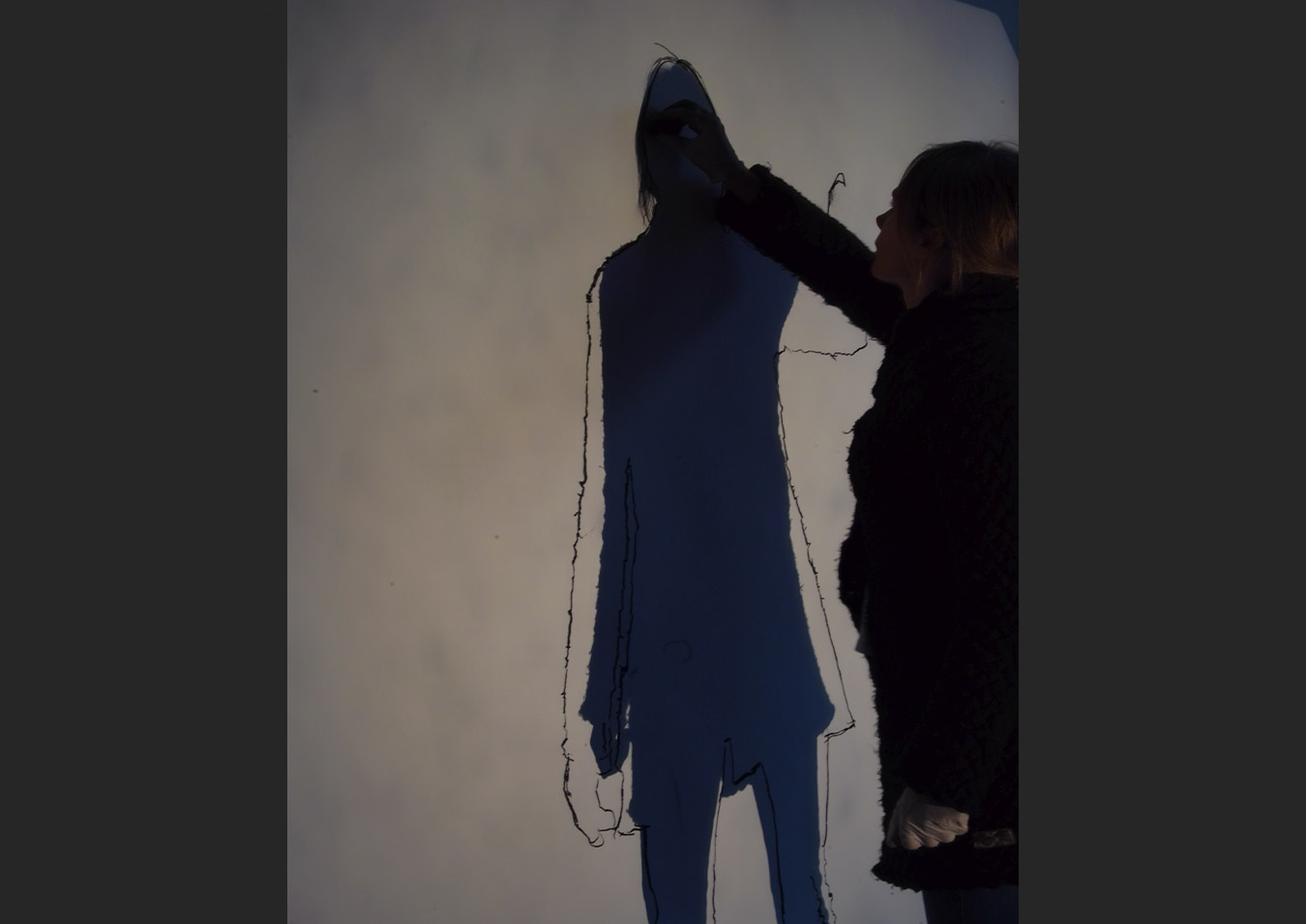 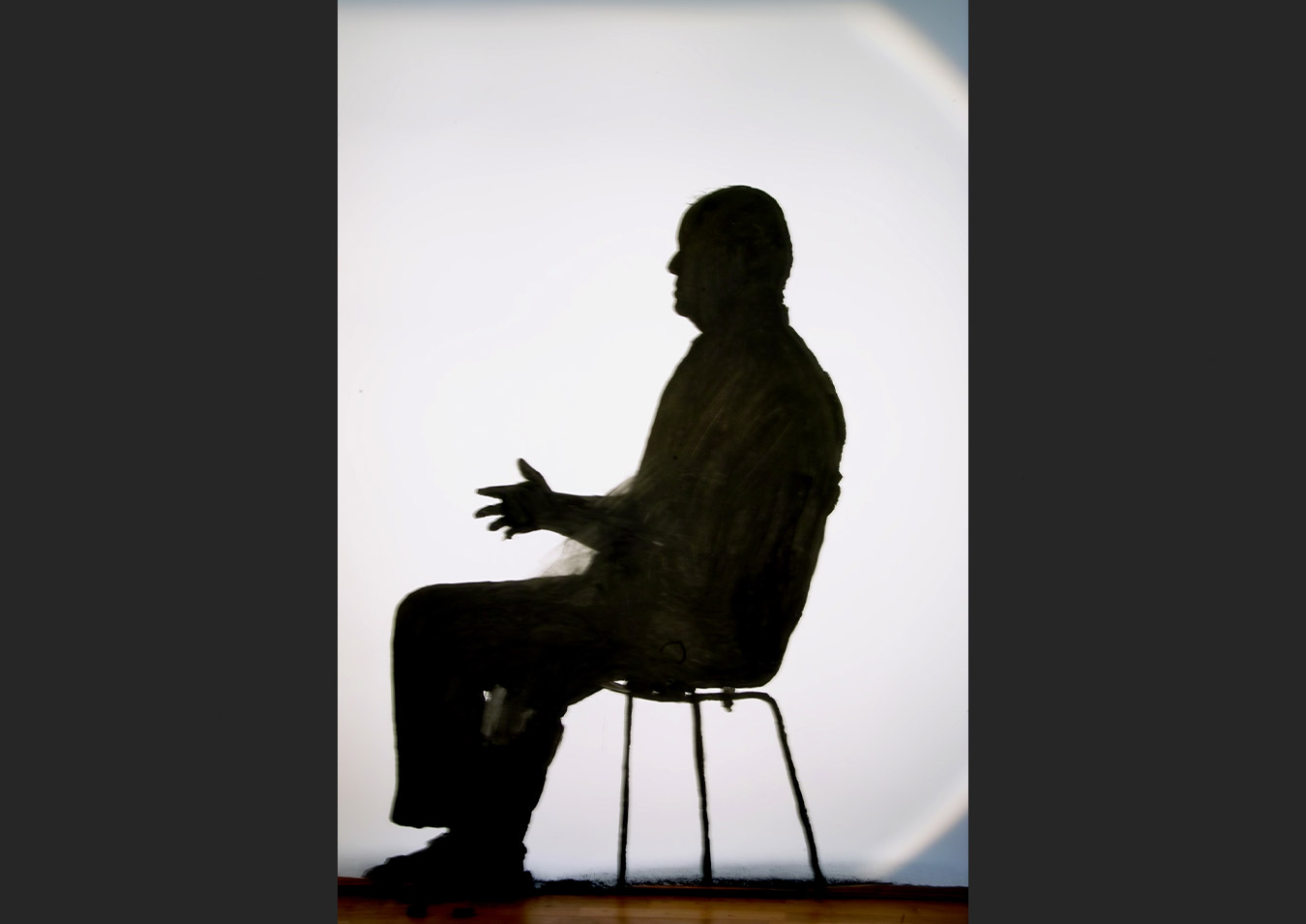 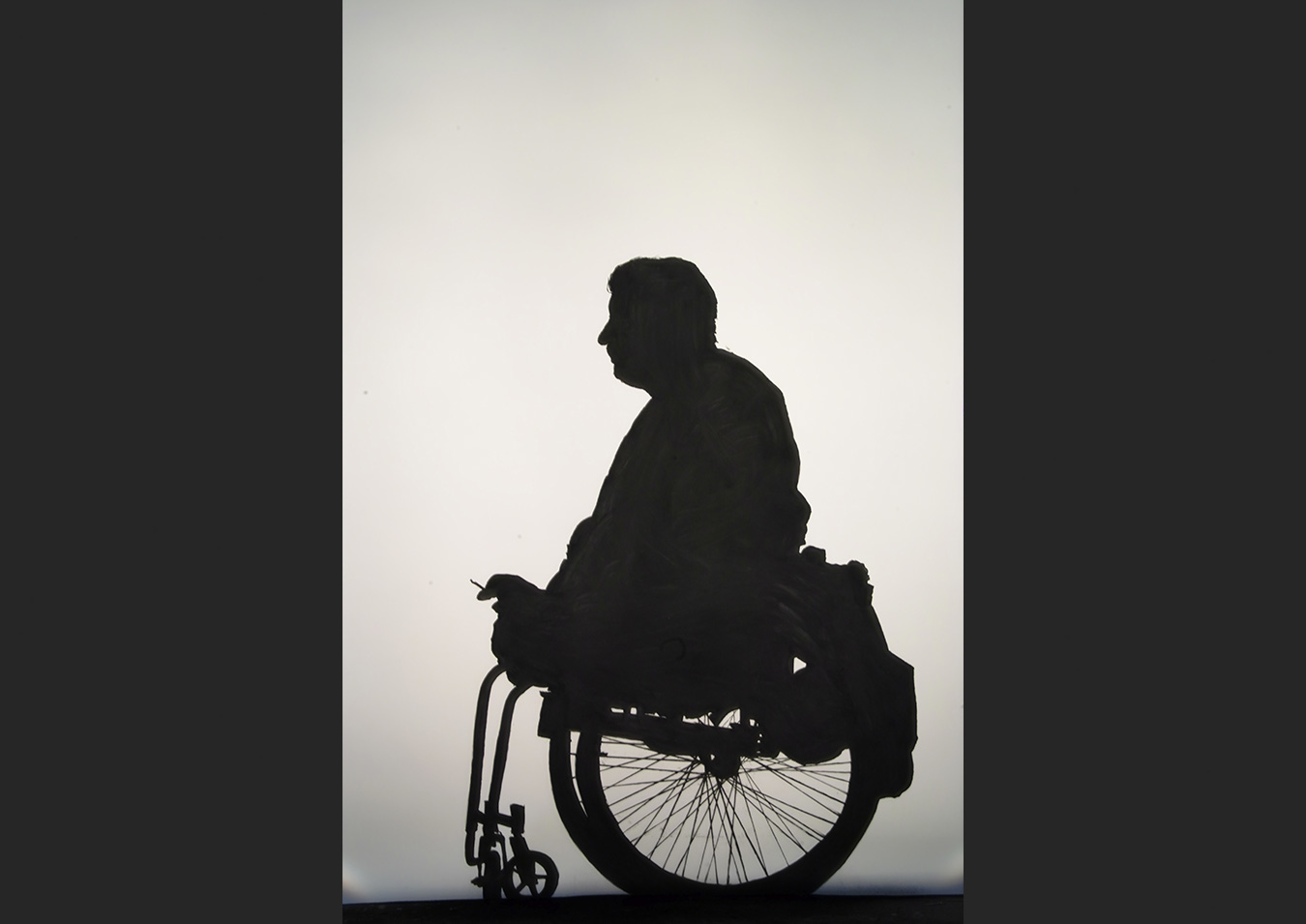 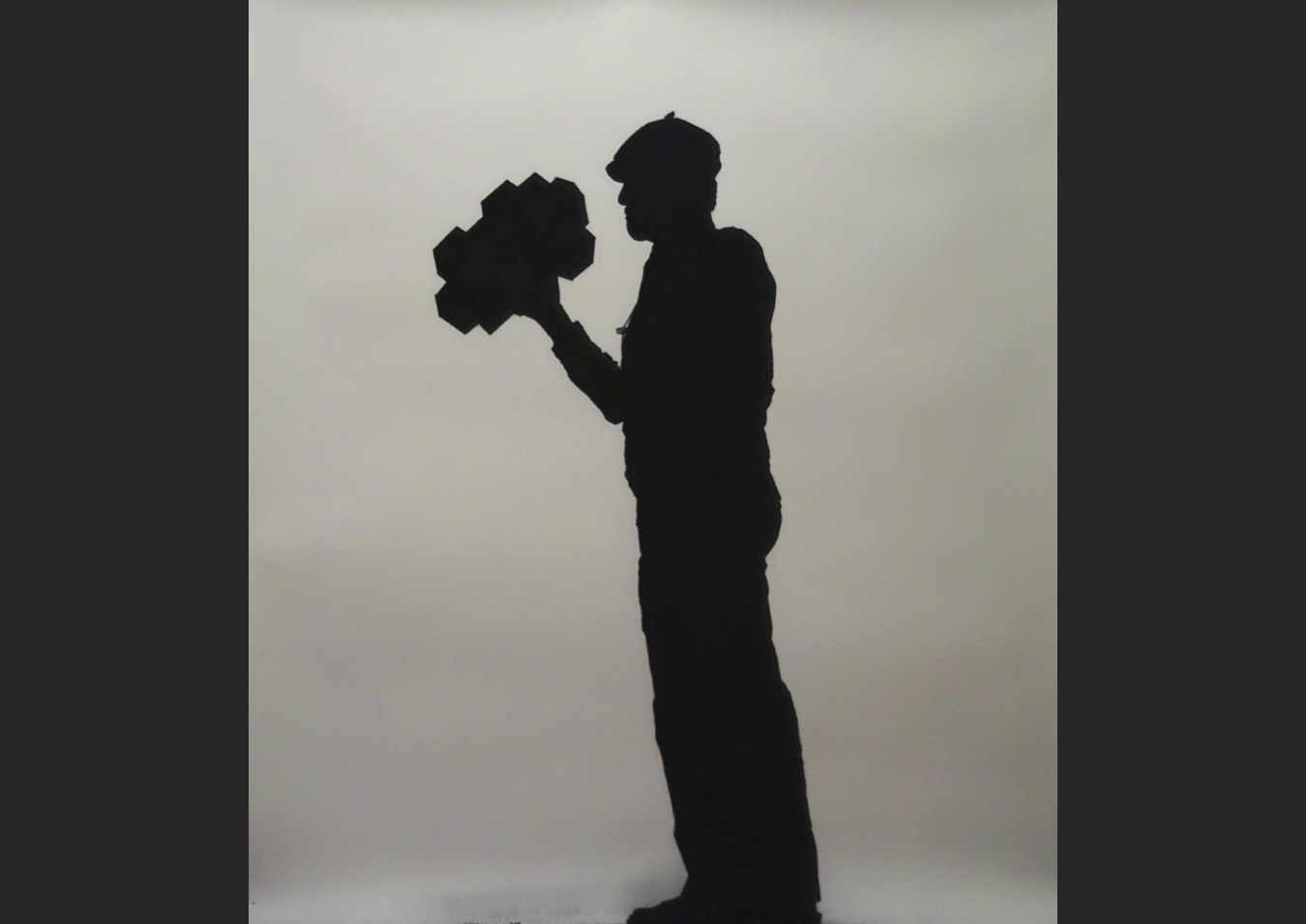 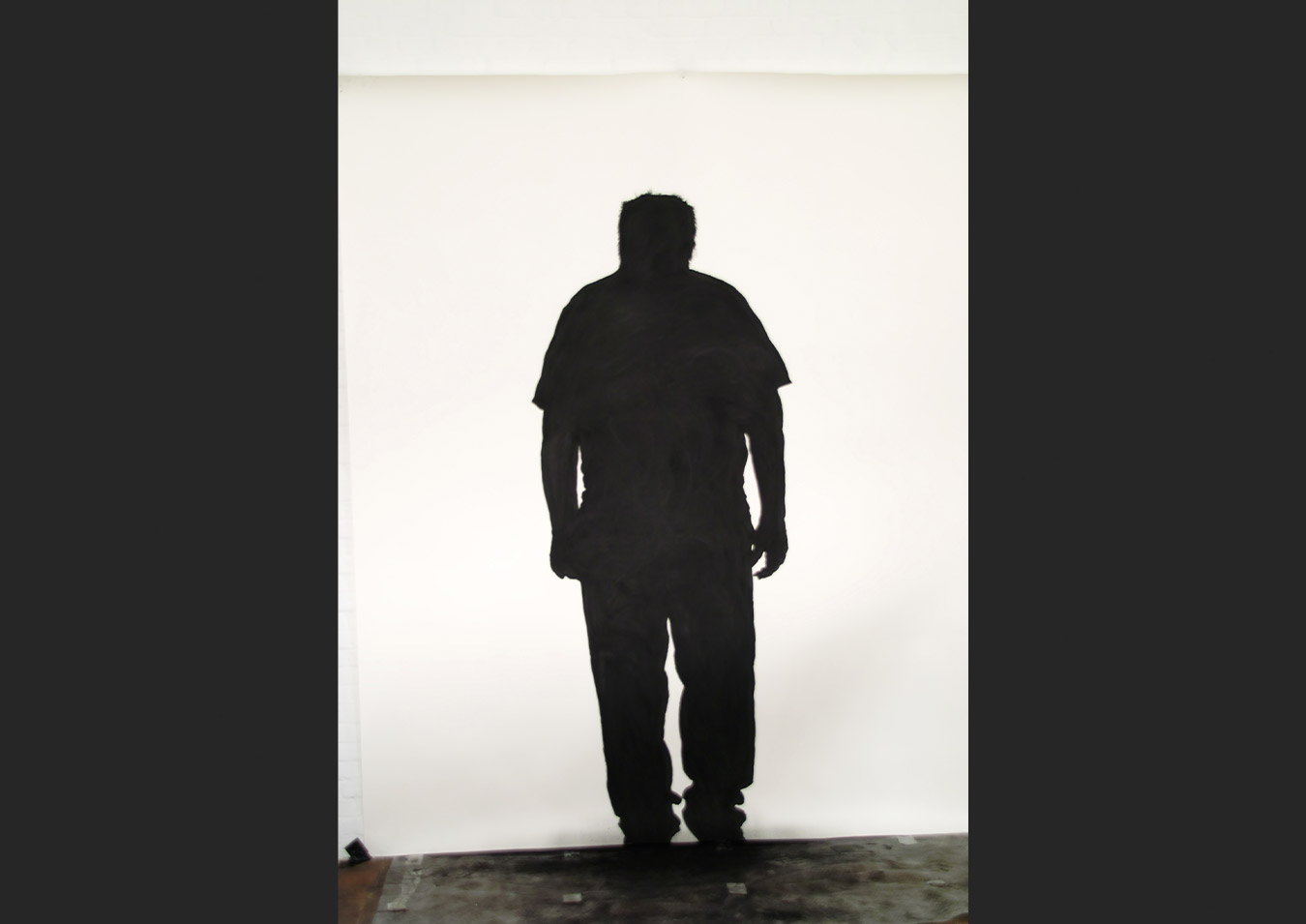 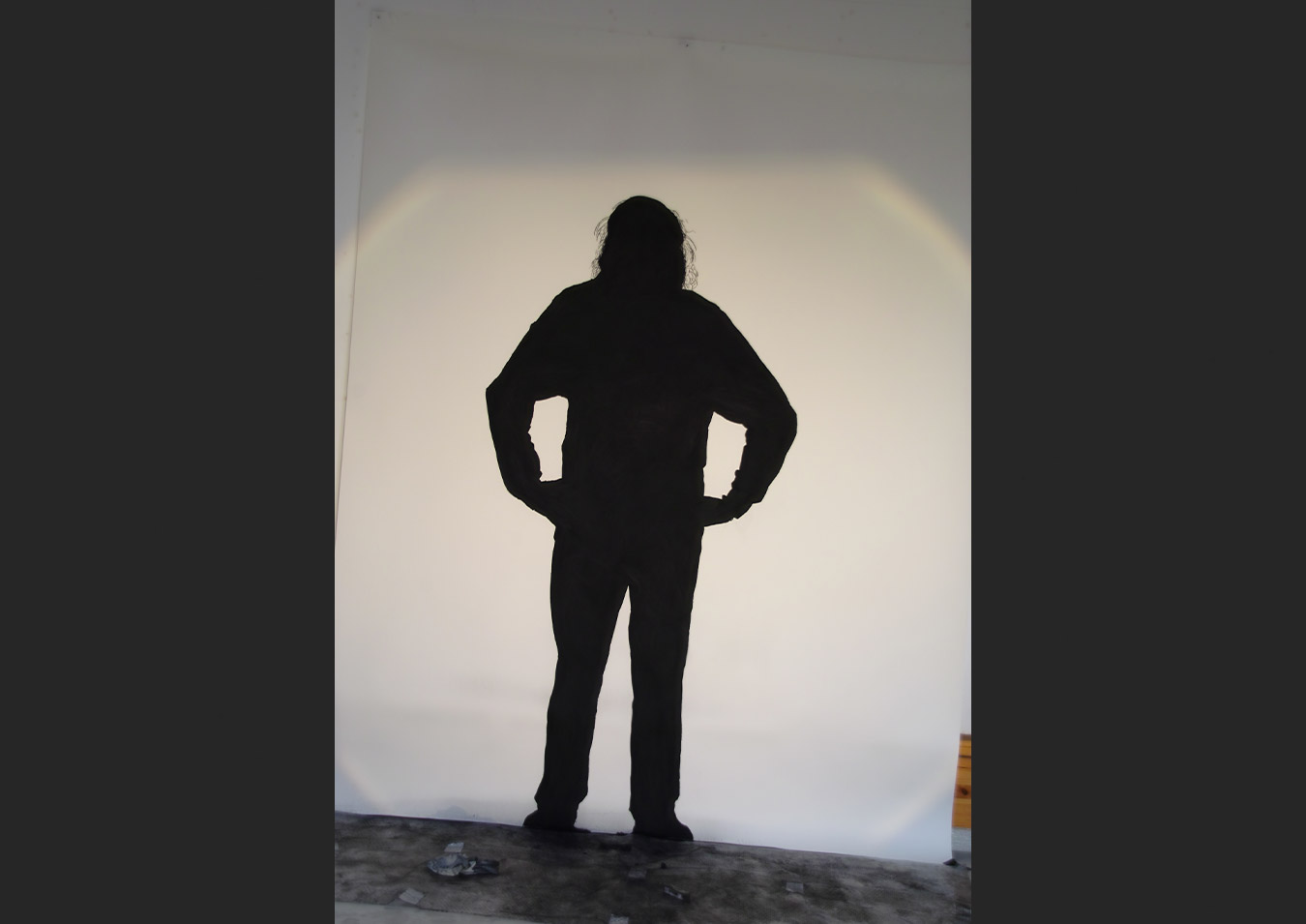 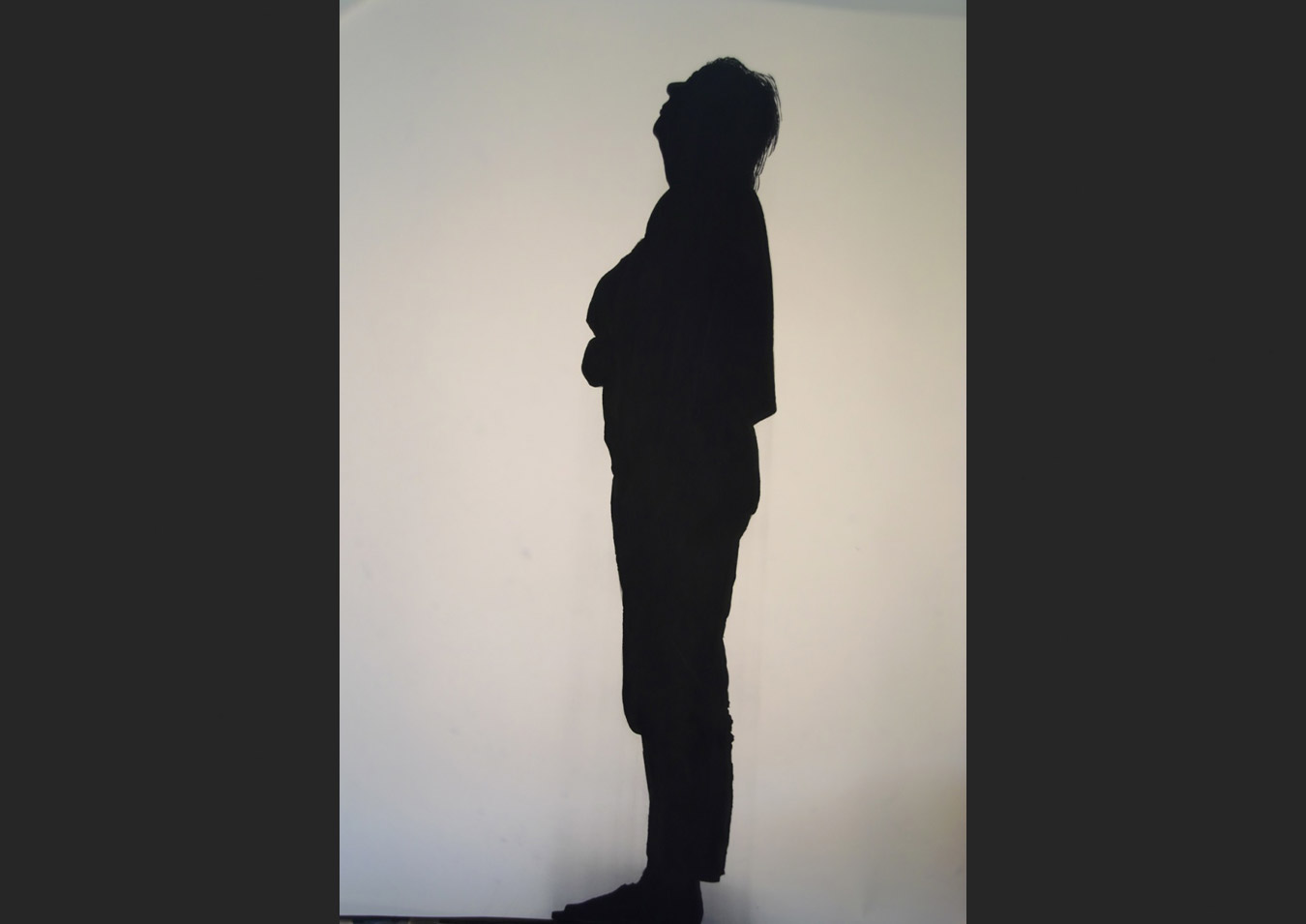 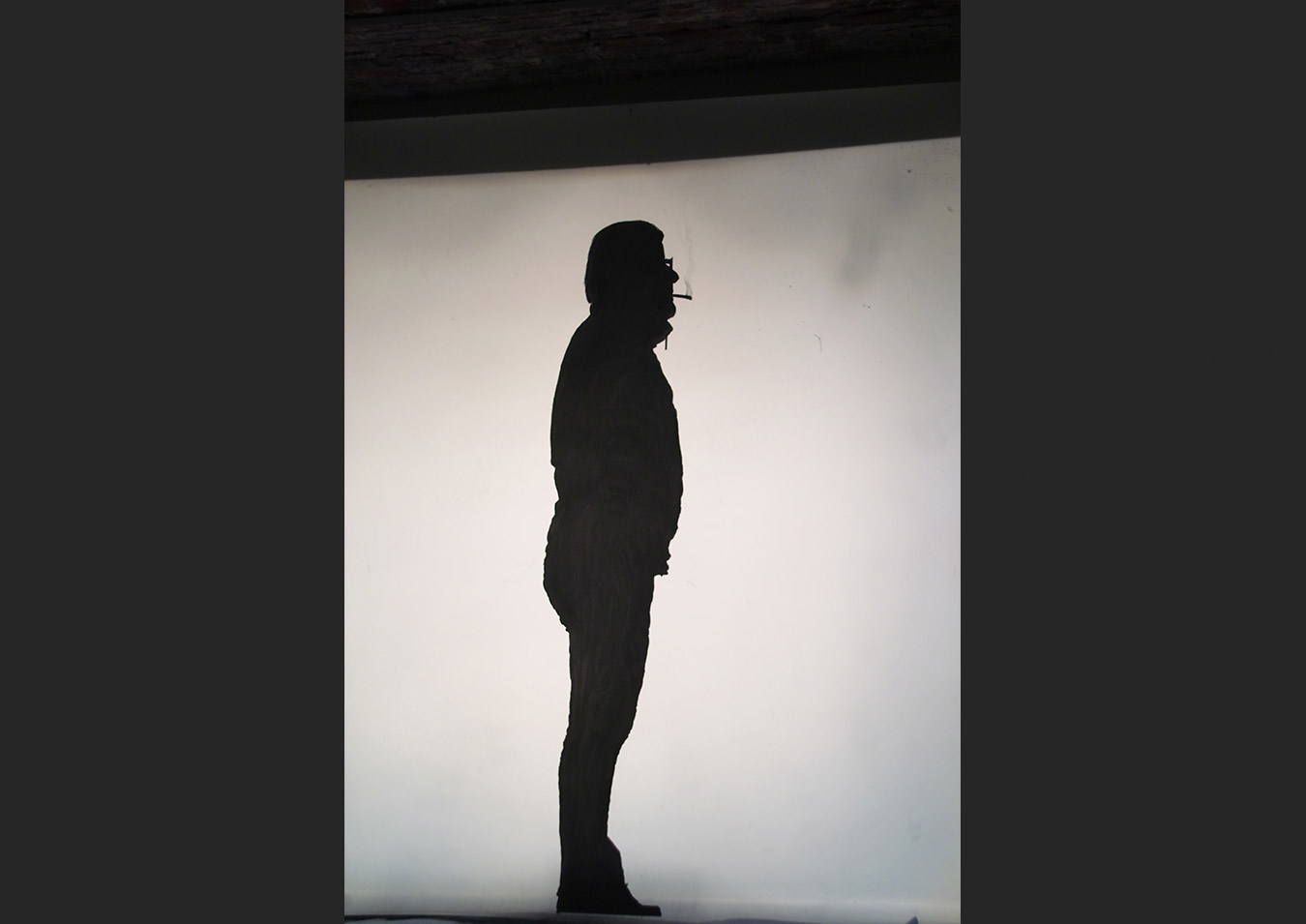 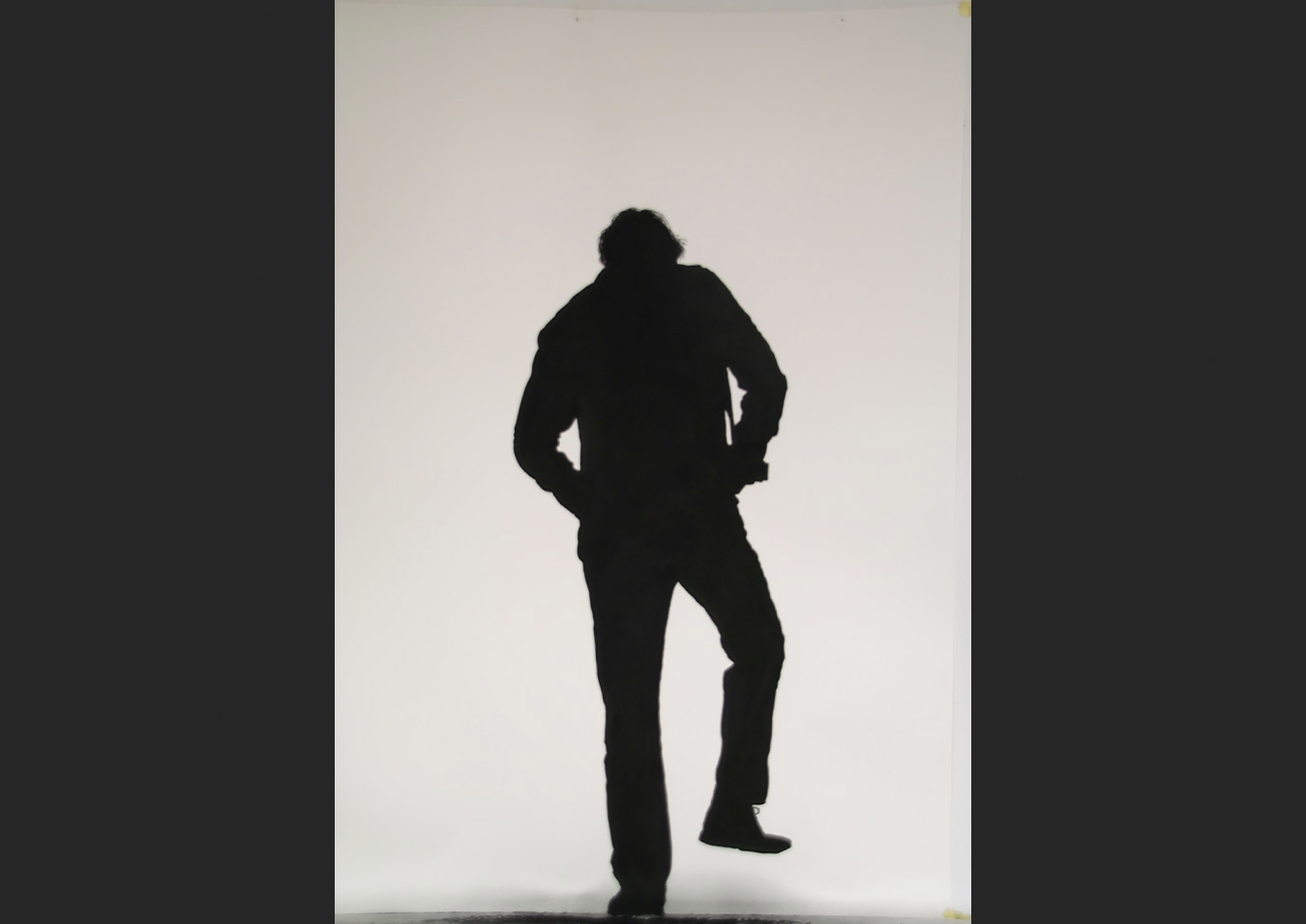 My projects often start with an image that becomes more and more clear in my mind.

My intention was to pay homage to artists who were my teachers although they were not aware of this. I grew up in a house filled with art. The artists who have been important for me because of their works, I wanted to meet, remember, protect and preserve, because I love the works they made.

The first artist I met was Armando. The night before I met him, I spent in my studio experimenting to find out if the image I had in my mind was possible at all. How to project the beam from a slide projector, how to position the person in the light so that their profile becomes present?

The artist can choose the posture he prefers, I move around him and with my piece of charcoal I trace the contour of the shadow that is projected by the light. He then steps out of the shadow and I continue to work on the shadow by filling in the contour. I realise the master’s portrait while the master is watching me. And then we talk…. sometimes the dialogue continues and we exchange letters which I consider to be part of the project.

The second portrait was of Rob Scholte. I asked him to sit just as he would normally. A cigarette is always present. So is the wheelchair. He gave me no time. He was like a lion in a cage, roaring, shouting at me, angry because he had to put the breaks on so he would not roll out of his shadow. He gave me the time he himself needed to smoke one cigarette.

Woody van Amen holds the taxat, the double-cross shape he often includes in his work. It is a part of him, of his image, of his shadow.

Although the result of only one session, the portrait is often  expressive and highly characteristic; it would be impossible to mistake this profile with another person. For the first time I noticed this with Jan Henderikse. His portrait shows his two sides: he is sweet and angry, nice and malicious. In the end the image is more than a contour filled in with black, it is a life-like portrait.

Because of the works I studied as a child, I was well informed about the history of modern art. Making these artist’s portraits felt like coming home; art and art history together constitute a world in which i feel at home. This older generation of artists led the way for my generation, they shaped me.

Making a shadow portrait is also an excuse for actually meeting the artist. In the case of herman de vries this resulted in an unexpected journey: after we met we worked together several times. I could work in his biotope and he even asked me to publish a video in his famous eschenau summer press series of artist’s publications. We also made works together, also published in that series: traces of joy.

Meeting with Jan Andriesse was confrontational, he challenged me not as an artist but as a woman. At 8 at night I was in doubt whether it ever was going to work. Then suddenly he positioned himself for the portrait and a ray of light came through the roof window of his studio, touched his face and made him look up. The artist of the colours which are hidden in light.

Making Jan Fabre’s portrait was complicated and very demanding. After a bizarre dinner with his assistants and Rob Scholte in the castle where he lives, I spent the night in the tower room; it was a totally theatrical event with me as the single person audience. The next morning i asked to make the portrait but when we were working he did not give me anything, no energy, no mind. He also lit a cigarette and therefore I could not come close to him, necessary to keep him in the shape of his silhouette. He did not give me anything, but in the end he gave me everything because his world is the universe of shadows.

The session with Vincent Mentzel was different from the others, maybe because he is a photographer and he observes in a different way, less emotional perhaps, more with the eye of the journalist.

We talked about the impossibility to step out of your own shadow. I told him I made a selfportrait trying to combine light projection, drawing my own shadow and taking photos. Only in one unique photo I was able to capture the moment I step out of my shadow; my portrait, shadow and body are all together in that one image. Mentzel was fascinated and tried to enact that specific moment for himself. He is looking down at his shadow and tries to disconnect from it. If you look closely you detect his second eye, the camera, that is always there next to his body.

To conclude: a Greek myth about the origin of the portrait. The daughter of Butades the potter had to say goodbye to her loved one who was going away for a long period. She wished to keep an image of the man, so that she could remember him well. By the light of a candle she traced his profile on the wall of the house. Within the contour her father Butades painted the features of the traveller with clay. Just like that I want to preserve the artists I love.